In Memory of Ramzi Doany 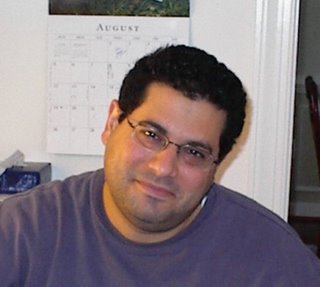 On The morning of of September 11th, Ramzi Doany, 35, arrived on the 100th floor of North Tower of The World Trade Center. Ramzi, worked for Marsh and Mclennon as an auditor. We know, Ramzi logged into his computer that morning, and had sent a couple of e-mails out announcing his return to his office after being away on business....

We also know, he called his Mother , upon his return to his home in Bayonne, New Jersey the night before.... 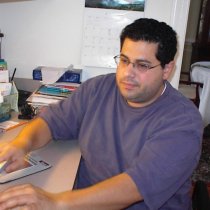 What I have learned about Ramzi Doany, through the written accounts of his life, I have certainly enjoyed.

Ramzi Doany, was born to Palestinian parents in Amman, Jordan. His Mother reports, him being a likeable and popular kid. When she would pick him up from school, he would be surrounded by a group of his peers, and he would be, telling them stories and making them laugh.

His Sister told the following story in an interview with a Jordanian news publication.

“As a child, Ramzi once dug a hole in our backyard for a terrible report card he had received and placed a headstone on top,”

“When our parents asked for the report card, Ramzi explained to them that, “it was dead and buried!”

Ramzi Doany , attended high school in a London boarding school before coming to Milwaukee as an international student at age 19. With the goal of a career in international business, and earned a bachelor's degree in accounting at the University of Wisconsin-Milwaukee in 1992. After working in a local accounting firm he moved on to a firm in Philadelphia. That firm was purchased by Marsh & McLennan, and Doany was assigned to their New York office.

His family and friends also give several accounts of his kind and generous spirit. 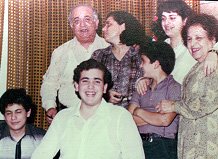 Ramzi, amassed friends. He amassed them with acts of kindness, like tutoring a woman with lupus, two children and no husband, to get her though college, or letting his college roommate and the roommate's wife live in his condo for two years so they could save money for a down payment on a home.

His Sister says, her brother never had trouble making friends.

“One conversation with our next door neighbors and Ramzi was instantly at ease,” she noted. 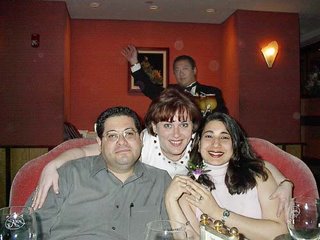 Ramzi Doany, loved family events and would take her children to play golf and soccer. "He also loved to cook for us whenever he came for a visit,” his Sister added. "He loved cooking for family, and even took to cooking Thanksgiving turkeys and had great pride in preparation, (even if they were a bit dry)."

In one interview with his Sister, she reports Ramzi, was an adventurist, and Ramzi had put a down payment on a Harley-Davidson motorcycle.

“It was to have been delivered in April or May of this year,” his sister said. 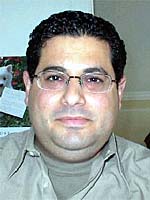 Ramzi, was one of the persons killed in the attacks on September 11th.

His body was never recovered.


In a interview with a journalist, Ramzi's Mother stated....“He always kept in touch,” she said. “If a week went by without a call from him I would always worry, I'm going to miss that presence and energy”.

One at Milwaukee's St. George Melkite Catholic Church, and another at Al Fadi Anglican Church in Amman.


Ramzi, May you rest in peace, and may your family find comfort in the sweet memories of you....


A note to the Family. I am sure if you are looking for a tribute, or memory of your Son at some time, you might find this site. I truly wanted to honor your Son, and Brother. If there is information that is not correct, or inaccurate, please let me know, and I will change it. If you would like the photos removed, or would like to add photos, I will oblige. If there is any other information you would like for us to know about Ramzi, let me know. I will certainly add it. I am so sorry for your loss...


Thank You to the following sites, and memorial sites for providing me with information, and quotes.

Remembering September 11th site
Posted by Rachelle Jones at 11:27 AM

Thank you of sharing so much about Razmi with us. I feel I know him through your words. Thank you for taking part in Project 2996. What a heartfelt tribute. Let us not forget those who died and the families left to live life without them. We shall remember the day the world cried. We shall remember a day that the whole world mourned together. We shall remember September 11th as more than just a number thanks to the 9/11 tribute started by D.Challener Roe.

You did a great job introducing us to Ramzi. I am amazed by his willingness to share, his time with the college student, his home with his college roommate and his wife. I liked the fact that he was getting a Harley.

I am sure his family and friends miss him tremendously.

Thank you for remembering Ramzi.

Great job, AWTM. Ramzi's memory will live on as long as people like you care enough to make the 2,996 immortal through your words.

Thank you for a wonderful tribute. He worked for the same company as the woman in the tribute at my place.

A beautiful tribute to a good man. Thanks for sharing Ramzi's life with us today.

It is difficult to read all these tributes but at the same time, critical that we do. If allowed to become just an 'event', we lose the human side of things and that should never happen.

A moving tribute to a live interrupted.

In Memory of
Marcello Matricciano

Thank you, your tribute was beautiful.

I did not know any victims, but I learned a lot about my asigned person. His tribute is on my blog.

9/11 is what compelled me to re-join the military and do my part.

Thank you for this moving tribute to Ramzi. I met him my freshmen year at UW-Milwaukee, I too was a business student. He always was positive and made others feel good about themselves. I think anyone who knew Ramzi is sickened by the news that he was taken in this terrible trajedy. Rest in peace Ramzi - you made the world a better place.