Battle of the Brisket 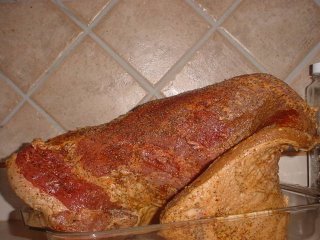 *brisket after a 20 hour marinade

So for Labor Day, Contagion and I had a battle of the briskets.

Firstly. I do not LOVE brisket. It is a fatty and tough piece of meat. Odd combination.

Second, I think we bought the brisket in thoughts that our Memphis in May, award winning friend would smoke it for us.

So, knowing full well, that the four of us would never eat a million pound brisket...

I did gill it over Labor Day, as we had compnay over for the holiday.

I rinsed the brisket under water, then rubbed it with olive oil, course ground black pepper, salt, and garlic.

I then mixed 2 cans of beer with....the following ingredients
("Beer is a tenderizer because the alcohol denatures protein" )

I mixed the above ingredients, and allowed the brisket to marinate for 20 hours....

The brisket hit the grill at a hot heat about 400 degrees breifly, and then heat was turned to 180 degrees, for 4-5 hours.

While brisket was on the grill, I made a mop sauce out of brown sugar, and rice vinegar. The brisket was mopped about one time per hour on all sides.

Here is a photo of the brisket at half way. 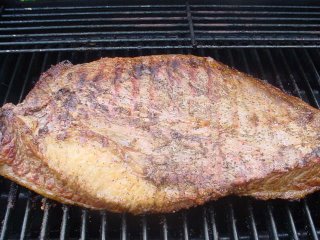 Unfortunately, I did not get photos of the finished product.

Our company came, and i felt like a dork taking photos of the meat on the grill.


However, in the center it was medium rare, and ends well done. Cooked just about perfectly. It was not tough, and turned out to be delicious, I was glad to serve company a delicious dinner!


I will add here. The brisket was so ginourmous, it fed an armory full of men- lunch the following day.
Posted by Rachelle Jones at 9:04 PM