Those Damn people at Hasbro have created THIS. 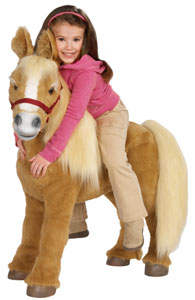 For the mere price of $238.00 I can be Pink Ninja's favorite person in the WORLD, forever. And let me say this, in her sweetest sing song lilting voice, she keeps requesting this "pony", every time she sees the commercial. Which, thanks to the ingenious marketing folks at Hasbro seesm to be EVERY SINGLE time we turn on the TV, turn the corner, open the newspaper, open the mailbox, start the car, use the toilet, there is the beloved Butterscotch.

"The BUTTERSCOTCH pony will amaze kids and adults alike with her level of "awareness" and realism. She can move her head up and down, and back and forth, and her eyes open and close. Sensors enable BUTTERSCOTCH to respond and interact with the child. When her mane is brushed, a child will hear contented whinnies. When her ears are tickled, she will turn her head and try to find you. When she gets hungry, she'll happily "eat" her very own carrot. And, when she's had enough, she'll shake her head to let you know she's full. Petting her muzzle will cause her to sniff!

"Hasbro has created a breakthrough product that both continues the success of the FURREAL FRIENDS line and defines the future of the toy industry," said toy and children's lifestyle expert Chris Byrne, also known as The Toy Guy(R). "BUTTERSCOTCH is both a marvel of engineering and technology and a classic 'dream toy'--a virtually real horse that girls can love and care for."

With built-in light and sound sensors, the BUTTERSCOTCH pony can tell what is happening around her. If it suddenly gets dark, she may become frightened and need a hug from her caregiver. She will also turn her head in response to noises, and relies on calm, soothing voices to settle her. Whether grooming her, playing with her or even climbing on her back, pretending to gallop into the sunset, the BUTTERSCOTCH pony can be a child's best friend and a parents' solution to satisfying their child's greatest dream without having to build a barn. "

Now folks, is that a toy or what? Go HERE to find out more.


What little girl does not want a pony? The bonus? This thing does not require food, there is no poop to clean up like "Poop Scoopin Barbie", it is not a "slutty horse" unlike "The Slutz Dollz".
This is a great wholesome toy, no poop, no short shorts. This is an American toy, it says Cowboys, wild west, Western Expansion, property ownership. It also says, "Mom has $238.00 dollars and loves you so much she bought me for you, even though there is a chance you may end up bored with me. I could end up in the corner collecting dust in 2 weeks time."
Posted by Rachelle Jones at 9:28 PM