"Veteran's Are Our Living Heroes" 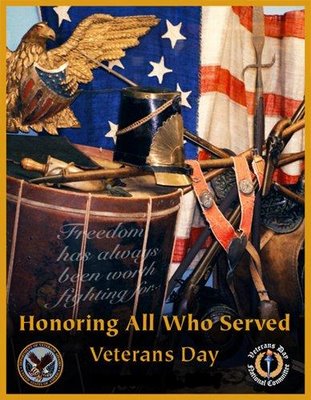 Before reading further please go here, and watch THIS

I will wake tomorrow in quiet surburbia, DH stateside.

I have many people to thank for that...

I did find this over at Military.com and I do think it is a must read.

A Brief History of Veterans Day


Veterans Day, formerly known as Armistice Day, was originally set as a U.S. legal holiday to honor the end of World War I, which officially took place on November 11, 1918. In legislature that was passed in 1938, November 11 was "dedicated to the cause of world peace and to be hereafter celebrated and known as 'Armistice Day.'" As such, this new legal holiday honored World War I veterans.

In 1954, after having been through both World War II and the Korean War, the 83rd U.S. Congress -- at the urging of the veterans service organizations -- amended the Act of 1938 by striking out the word "Armistice" and inserting the word "Veterans." With the approval of this legislation on June 1, 1954, Nov. 11 became a day to honor American veterans of all wars.

In 1968, the Uniforms Holiday Bill ensured three-day weekends for federal employees by celebrating four national holidays on Mondays: Washington's Birthday, Memorial Day, Veterans Day, and Columbus Day. Under this bill, Veterans Day was moved to the last Monday of October. Many states did not agree with this decision and continued to celebrate the holiday on its original date. The first Veterans Day under the new law was observed with much confusion on Oct. 25, 1971.

Finally on September 20, 1975, President Gerald R. Ford signed a law which returned the annual observance of Veterans Day to its original date of Nov. 11, beginning in 1978. Since then, the Veterans Day holiday has been observed on Nov. 11.

One of the best things I have found over at military.com is Veteran's stories, letters, photos, and journals from the front. Go over and read some first hand accounts.

Lastly, I am going to bed in quiet surburbia DH, by my side, thankful to those who have made it possible. Including my Dearest Husband.
Posted by Rachelle Jones at 9:42 PM