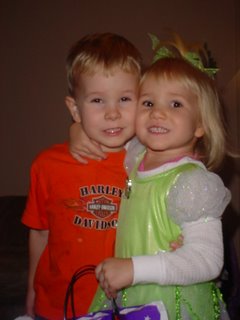 *Photo of Sir Rowland, and Pink Ninja, looking like they never fight on Halloween Night.


Halloween was interesting. Like I mentioned before it was DH's first time "home" for Halloween with The Collective. Sir Rowland, did not want to go Trick or Treating. He did not want a costume, or a Halloween t-shirt. He wanted to pass out candy, and turn people into frogs. I managed to get him in an orange Harley shirt....

Pink Ninja, wanted to be Tinkerbelle, who she happens to dress as 25% of the time anyway. It was chilly out, so I did manage to convince Pink Ninja that "Tinkerbelle, wears long johns under her fancy dress when it is cold". It was a hard sell, but it worked.


Sir Rowland, made Pink Ninja practice here at the house, before heading out. She was so excited. Look at the grin on her face!! She was excited that it was ALL about her, and her Daddy!! 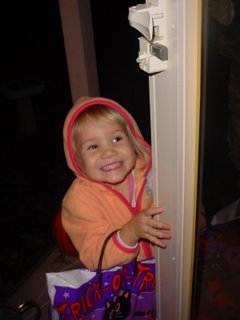 *The great thing? DH said all knew she was Tinkerbelle, even with long johns, and a coat on! Because there is nothing worse than being asked who you are supposed to be all night! *
Posted by Rachelle Jones at 10:43 AM

Great pictures! They both look like they had a great time...

Now that is precious beyond belief. Wonderful, just wonderful!