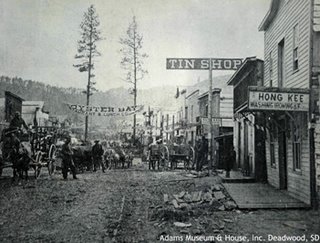 (Photograph of Deadwood taken from Deadwood Chinatown)I dreamt I was in Deadwood, South Dakota 2 nights ago, and took my laundry to some Chinaman, that also ran some sort of opium den.......the dream was in black and white, and ended quickly.

One of the only things I can stand to watch on television, has been Deadwood. I seriously have grown addicted to the program.

My DH's had kin up that way in the late 1980's when we began dating, and we took a trip up there with his Grandfather and Grandmother. The visit was more than a vacation, it was the first time I had met D H's Mother. She was the pit boss at a casino called B.B. Cody's. I do recall her walking me through downtown Deadwood pointing out the "old brothels", and telling me the prostititution was just recently outlawed......


"When the gold rush was over, the girls remained. Upstairs houses on Main Street became as much an integral part of Deadwood as legends of Wild Bill and Calamity Jane.

No city ordinance was ever passed to outlaw the practice, despite state laws forbidding prostitution. Several months before the l980 raid the police chief defended non-enforcement of state law."


However tonight I was looking up some information that Dearest Husbands Mother had told me, and I was checking to make sure it was true. I had found it unbelievable at the time. I found this, and had to laugh......

"Prostitution was always a big deal in Deadwood. For more than a century the world’s oldest profession was alive and thriving here. In fact, by the late 1970s, it was one of the only things keeping Deadwood economically viable. Indeed, most residents tend to agree that hunting season has never been the same. My stepfather likes to tell the story about the guy who came to Deadwood to hunt when the brothels were still here, then went back home and asked his wife why she hadn’t packed him any clean underwear. The wife replied that she had – she’d put them in his gun case."
Posted by Rachelle Jones at 8:57 PM