A Tribute to the Military 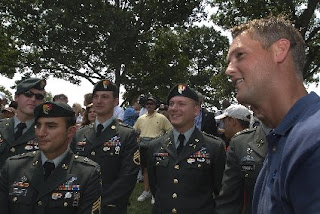 You may go here to read more, and watch a video of the event.

Around 3 p.m., the secretary arrived at the 13th hole to meet with seven Army special forces soldiers and two wounded war veterans. The soldiers and veterans are representative of thousands of servicemembers honored this week during the AT&T National PGA golf tournament hosted by Tiger Woods.

Woods, whose father Earl Woods was an Army special forces soldier for 12 years, has infused the inaugural tournament, which runs July 3-8, with tributes to troops.

“This is a very special tournament for Tiger Woods and all of these great golfers, and the PGA Tour to really put together an event that honors our troops, honors their service, and honors their sacrifice,” Rice said.

As she walked the grounds here, Rice described sensing a palpable feeling of support for America’s troops. She said Americans understand that military service requires troops and families to make great sacrifices, commit to long deployments and sometimes lose comrades.

“I have not seen a person out here who has seen somebody in uniform (and let them) pass by,” she said. “They thank (servicemembers) for what they’re doing. That makes a real difference for the country, because I know that our troops know that they’re being supported, but it’s also important for the American people to have a way to show that support.”

Retired Army Sgt. Michelle Saunders, who was wounded in Iraq, said the outpouring of support humbles her.

“We signed up, we raised our right hand because we wanted to; it wasn’t because we were forced to,” she said. “I know a lot of people on the receiving end say it’s humbling for them, but it’s actually very humbling for us.”

Saunders and a group of servicemembers will be treated to a day on the links here July 9, a day after the official tournament ends. Playing on a tournament-quality course is a rare opportunity that few have the fortune to enjoy, she said.

Woods actually played in a golf foursome July 4 that included two servicemembers. He and tournament sponsors will give 30,000 tournament tickets to U.S. military personnel over the course of the tournament week, and those attending will be able to enjoy the view from a special seating gallery, and snack on discounted concessions after showing military identification.

"My dad was retired, but I grew up on a military base, and played golf there and that was my home course," Woods said during the July 4 opening ceremony. "For me, all my life, I've been part of the military.

"I've always been around (servicemembers),” he said. “I understand the commitment it takes for men and women to do what they do each and every day. That's a commitment that I don't think that people truly understand.”

Allison Barber, the deputy assistant secretary of defense for internal communications and public liaison, called the tournament the “perfect package” to express support for servicemembers.

“The PGA Tour goes out of its way to use the golf world to highlight and thank our troops,” Barber said. “And then you have Dr. Rice – and there’s nobody busier – and she comes out, not just to watch golf, but she wanted to come out and thank the Tiger Woods Foundation, thank the PGA Tour, but she really wanted to spend time with our troops.

“I think if our troops got one message this weekend, the message should be that everybody is doing what they can do, within their worlds, to show that they support the troops,” Barber said. “And the message is so clear that the American people do support our men and women in the military.”

Woods and his father established the Tiger Woods foundation in 1996 with the mission of empowering young people to dream big and set goals to achieve those dreams through community-based programs, according to the foundation’s Web site. To date, the foundation has helped an estimated 10 million children.

In conjunction with the AT&T National tournament, Woods' foundation donated thousands of cards that will eventually reach servicemembers.

"The Tiger Woods foundation created post cards with the America Supports You message on there, and wanted to make sure that people had the opportunity to write a message to our troops and their families," Barber said.

As golf tournament attendees rode shuttle buses that drove them to various destinations on the tournament grounds, they were given a chance to write personalized messages on the cards, she noted.

"We’re taking those cards and giving them to our America Supports you homefront groups to be included in care packages, so they’ll go right out to our forward-deployed troops," she said. "We’re desperate for our troops and their families to know that no matter what the policy debate is, and (despite) the political scenario, one message is clear: America supports you."

Posted by Rachelle Jones at 9:23 PM