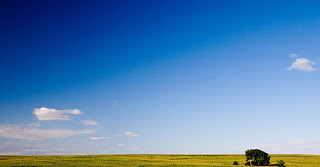 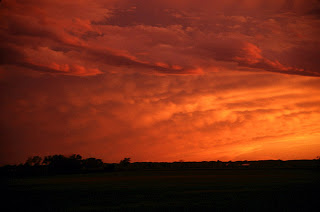 When we first moved to Arkansas, I had claustrophobia, and I could not figure out why. Until I noticed one day, it was the amount of trees blocking my vision. And although gorgeous and green and lush....I was missing the sky. My view of my surroundings, and went from 360 degrees, to perhaps 40. And I could not watch the sunset, or watch weather come in, which I had grown accustomed to over a long span of my life.


And I have to laugh when people say "Nebraska?" "I drove through there once, there was nothing there....."

In 7 years I have missed many sunsets here, as we live in a valley, and my view is incomplete. I grew up watching the sun sliding down the sky, looking as if it were being tucked under a field of wheat for the night....

The sky was as full of motion and change as the desert beneath it was monotonous and still, — and there was so much sky, more than at sea, more than anywhere else in the world. The plain was there, under one's feet, but what one saw when one looked about was that brilliant blue world of stinging air and moving cloud. Even the mountains were mere ant-hills under it. Elsewhere the sky is the roof of the world; but here the earth was the floor of the sky. The landscape one longed for when one was away, the thing all about one, the world one actually lived in, was the sky, the sky!

I drove through southern Nebraska on my way to Omaha... and then back down.
It was wide open and had such a wild, free feeling about it. I can see why you'd miss it.

I loved this post and had to pass it on. Thank you for remembering and sharing.