My Grandmother called it Decoration Day... 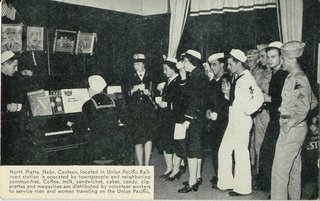 Driving over the prarie, watching the grain, and one train after another. Made me think about the coming holiday. My Grandmother called it Decoration Day.

The trains made me think about "The Canteen" in North Platte.

"On December 17, 1941, residents of North Platte learned that Nebraska National Guard members would be traveling through the community on a troop train en route to the West Coast. The residents decided that they would gather food and gifts for the troops and meet the incoming train to show their appreciation. Equipped with an abundance of gifts for the troops, residents met the train, but quickly learned that the train was carrying only Kansas troops, who gratefully accepted the donations. Seeing their appreciation and realizing the need for such a service, Rae Wilson of North Platte suggested that residents do the same for every troop train that traveled through the community.

From that day, December 25, 1941, through April 1, 1946-- a span of nearly 5 ½ years-- residents of North Platte and surrounding communities met every troop train that traveled through North Platte. This massive undertaking required sometimes meeting as many as 23 trains a day and at all hours, both day and night. The enthusiasm spread as approximately 55,000 volunteers came from 125 communities in not just Nebraska, but Colorado and Kansas as well. By the end of the North Platte Canteen’s operation, 6 million military personnel from every state across the country were greeted by the kindness and support of the North Platte Canteen volunteers.

Remarkably, the North Platte Canteen accomplished this great success without a dime of federal assistance. Instead, they operated on contributions from benefit dances, local businesses, personal donations, and volunteering. Records indicate that during a one-month period, the canteen served approximately 40,000 homemade cookies, 30,000 hard-boiled eggs, 6,500 doughnuts, 4,000 loaves of bread, 3,000 pounds of meat, 450 pounds of cheese, 60 quarts of peanut butter, 1,350 pounds of coffee, 1,200 quarts of cream, 750 dozen rolls, and 600 birthday cakes. What is more, all of this was donated even though families were still being asked to ration certain items. "


There is no place like Nebraska, and the peonies are in bloom, just in time.
Posted by Rachelle Jones at 10:56 PM