Santa gets cooler EVERY year! 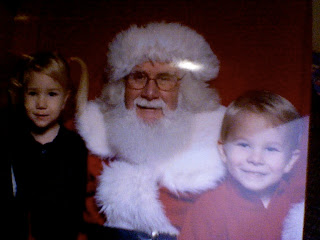 *sorry about the poor quality, no scanner, so took the photo with my macbook.


First off, my suggestion to go see Santa right after picking up Sir Rowland from school was the most genius thing EVAH. I mean EVAH.

There was one tot sitting with Santa. One, and NO LINE. Can you believe that? No line.

This meant that Sir Rowland, and Pink Ninja got as LONG as they wanted with the big guy.

I might mention here, Pink Ninja remains under the weather. Ick...Sir Rowland is better. Pink Ninja, not so much. She is also grouchy and bossy when she is sick. Oye. So she was not so sure about Santa Claus. Sir Rowland, LOVES Santa, not a problem.

So photos taken. Not the greatest photo of Pink Ninja, but Sir Rowland...well look at his face. You also will note, Pink Ninja is all sick looking around the mouth, dry and pink from the constant stream of snot, and from tissues being smeared across her face.

So Santa gave them candy canes, and chatted with them for a bit about the wish list this year. I am not sure what Pink Ninja wants, but she did chat with him.

Before leaving I mentioned to Santa that today Pink Ninja was celebrating her birthday, and do you know what he did? He brought her over to his big chair and sang Happy Birthday to her. Santa sang Happy Birthday, loudly and proudly. He also gave her a tiny reindeer. WOW.

Then we went off to Build a Bear. A place frankly we have avoided as a one income home. But she had one request for her Birthday and it was a build a bear. Frankly we were ready to be hit pretty hard, due to the array of costuming and accessories these folks have to dress the darn bears with. But guess what? She picked out Rudolph the Red Nose reindeer. Guess what, Rudolph does not wear clothes. Easy and painless.

Then off to our favorite Chinese Eatery. It was horrible, no veggies. Ok a mushrrom and cabbage here and there, but no veggies. Ick. This is why I cook 21 meals a week at home. I swear.

We did have time to do a bit of window shopping, I found the snazziest skirt ever at Ann Taylor, Cream, and chocolate plaid. However they are out of their minds with the 98$ tag....to rich for my blood. do you know what I can do with $98 dollars? I can do some amazing stuff with that. I told the woman it had better be wool, which it was, but still. I will buy it when it goes on sale, or when someone knocks it off at a discount retailer.
Posted by Rachelle Jones at 10:14 PM