I almost forgot to tell you about the rhubarb 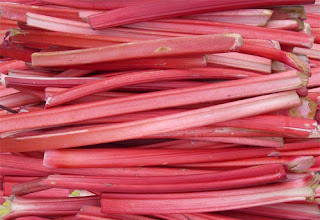 Rainy, windy, and a chill to the air. Certainly not cold by any means, but time to find the jackets.

But before I forget, I need to tell you about rhubarb.

When I first arrived here, 7 years ago, it was one of the first things I asked about. Someone in the produce department asked me if it was a type of meat. No one managed to locate any for me, for 2 years, then I bought some icky frozen kind. Yuck. Then I went without it again.

On one of my many trips home, I picked all of my Fathers rhubarb, he had a patch about 10 feet by 3 feet. Maybe bigger out back. I had went through it all. I had made rhubarb sauce. Which is essentially cooked down rhubarb, with strawberry jello, and water added. This makes a fine sauce for ice creams in the summer. I had also made rhubarb sauce, cakes, crisps, and froze some. And then I recalled my Father's rental property also had a patch, so we went up there, and I picked all of that as well.

I came back to Arkansas, no rhubarb. None.

I have blogged often about "my little man down the road." His business has grown. When I first arrived, he was selling veggies under an awning in his front lawn, and then there were signs, and then baskets. Now he has an entire building near the roadside that says "Pops Produce". He is like 80 and decided to start his own business, and is successful. Anyway, Pops is the place I get most of my produce, his wife has been undergoing cancer treatments, for the past 8 months, wears a bandanna and her color is bad, yet every time I pull up, she is out working, or sitting outside in the wretched heat with a big smile.

So when I asked Pop about rhubarb, he got a pencil and wrote it down. He then asked me, "how it comes?" and "when to grow it".... I started laughing at myself, because I had no idea. I told him every since I was a little girl, every house we owned had a patch behind the garage, or the garden, and of course the neighbors always had it to, and you were certain in spring, that someone would leave at least 2 brown paper bags full of the stuff on a table at church that have a sign attached that say "take all you want". Everyone I knew had rhubarb when I was growing up, and I NEVER saw anyone plant it. I suppose "you can buy seeds" I told Pop.

Every time I made a trip to the commissary this spring and summer I checked for rhubarb. I only hit the jackpot once, and I will admit to taking every last stalk of the stuff. I did, I was greedy with it, and I am ashamed of myself. But frankly, there was just enough for a couple of pies. I now think about the 90 year old retirees that made the trip to the commissary that day because one of their retiree friends told them "they have rhubarb at the commissary." Only to see miserly me, with big green leaves, and those pretty pink stalks flowing out of my cart....

It is still in my freezer, and I intend to make a pie tomorrow.

And when I move back to the GREAT PLAINS, I am planting some rhubarb...


ANCIENT HISTORY
The earliest recorded use of rhubarb is 2700BC, although its use is thought to date back much further. At this time rhubarbs use was as a very important drug of the time, being used for a variety of ailments particularly gut, lung and liver problems.
Marco Polo is attributed in bringing the drug to Europe in the thirteenth century when it was referred to as the Rhacoma root.
The drug was so highly regarded and much sought after that in 1657 in England it could command three times the price of Opium.
The first time the plant was seen growing in Britain was in the sixteenth century when the seeds were introduced in an attempt to grow and process the drug here, but the wrong strain was imported and eventually its use in this country went into decline as the British version simply did not work. The rise of modern medicine eventually took over from the wondrous drug.

RHUBARB IN THE DIET
Rhubarb was first used in English cooking in the late eighteenth century probably in an attempt to get the benefits of the drug into the body (although it had been used extensively in Syria and Persia since the thirteenth century) only gaining in favour with the British when the forcing process was discovered in Chelsea Physic Gardens in 1817, when some roots were accidentally covered with soil in the depth of winter. On removing the soil some weeks later tender shoots were noticed. These were found to have a superior flavour and quality than anything ever seen before. From this initial discovery of blanching rhubarb, commercial growers in the London area
began growing or blanching rhubarb, covering with soil or manure, some taking it a stage further, actually lifting the roots and placing in buildings to grow on. Rhubarb at last found favour with the British.