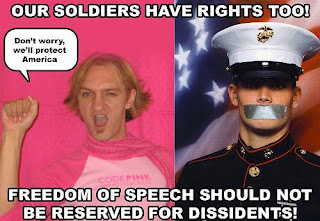 This was sent to me by a friend, she asked me to publish it here at AWTM. I was honored she asked.

All Symbols Are Not Created Equal

The military uses symbols to denote everything. Service branch, rank, accomplishment, sometimes even MOS are all represented without having to say a word.

Military families share some common symbols: the blue star, the yellow ribbon, the purple heart and sadly, the gold star.

For the Marine Corps, it starts with the Eagle, Globe and Anchor. The wearer of this pin is known, first and foremost, as a United States Marine. It is presented at the completion of boot camp. It is earned. Semper Fi, do or die, baby.

The Marine Corps Dress Blue uniform is full of symbols. The blood stripe on the pants represents sacrifice, the blue of the tunic represents bravery and the white of the collar represents honor.

Rank insignia denotes a Marine's achievement and with that, the addition of responsibilities.

And when a Marine falls, his loss is symbolized by the rifle, helmet, boots and dogtags.

At at the Marine Corps Birthday Ball, an empty place is set to symbolize those who have gone before. Gone but not forgotten. Ever

.In order for such symbols to be effective, they must truly have meaning.

So when an institution like the Marine Corps, full of such symbols, comes up against an organization that..oh, I don't know...uses Dollar Store pink foam tiaras and red fingerpaint as symbols...it's not exactly a cage match, is it?

Posted by Rachelle Jones at 6:03 PM

Never stopped by your *place* before, AWTM.
Nice digs.
As to Carrie's letter, I always love it when the other side brings a butter knife to a gun fight.

She does good work. Thanks for posting this.

FANTASTIC!!! I have to admit my eyes teared up a little bit when I read what your friend had written, well except for the last part made me spray soda on my laptop!