Pink Ninja touching the snow for the first time. 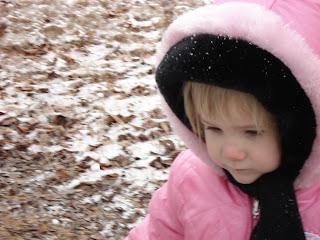 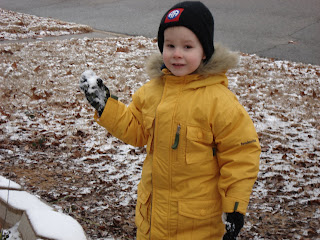 *Sir Rowland happy to be throwing a snowball at his Mother.

Heard at Casa De Dust when the blinds were opened.

Sir Rowland: "Mommy, the Earth is covered in a blanket of white."


We woke yesterday to what appeared to be a light dusting of snow. However, the ground is still warm enough, that the dusting turned into a slush/ice. We literally had to go through the yard collecting snow from the surfaces of all things, until it was all gone. I am not kidding. A snowball was made out of EVERY available bit of snow. When we ran out, The Collective wanted to "go to the neighbors to steal the snow off of the car".

I was asked to create a snowman, and a snow fort. I tried explaining to The Collective, that snow was needed to do these things. They kept begging, and I could not produce anything, but snowballs.

After an hour and half or two, I convinced them that were hungry for a hot cocoa, and grilled cheese. It was very cold.

In other news, it snowed even more through the night, by 6:30am, all I could hear was begging to head out of doors. 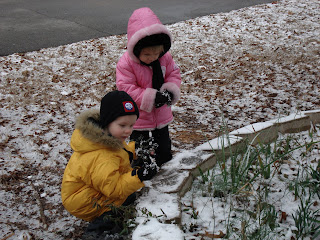 *The Collective, finding every flake of snow, to throw at Mom.
Posted by Rachelle Jones at 8:14 AM