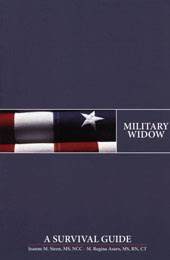 I am currently in the middle of this book.

Joanne M. Steen, the widow of a naval aviator killed in the line of duty, is a nationally certified counselor and certified strategic planner, crisis responder, instructor, and speaker on military loss. M. Regina Asaro is a psychiatric nurse certified in death and bereavement and a crisis responder who worked with a team in Oklahoma City in the aftermath of the bombing and with the families of victims of the massacre in Srebrenica. She has presented many workshops on the impact of violent crime, grief, and traumatic loss.

I am unsure how to discuss this topic of death. I have seen a lot of death in my day. I am by profession an LPN, mostly in hospice care, and geriatric areas. I have lost every Grandparent to disease, and a Mother, 4 cousins, an Uncle, and the list grows. I have cared for hundreds of dying people. I honestly have always thought I was "good" at death. Part of it is based on my faith, the other is I understand death as part of life. It is the nature of things, and for some reason I think that is forgotten. I am not sure where the disconnect with death came in. Although I think we have separated from it as much as we can. We have sort of hired it out. There was a time when people took care of dying family in the home, cared for them, allow the body to be displayed in the parlor of a home. In some cases, a lot of families prepared a body for burial, built the casket. With medical advances, and changing lifestyles, this does not happen often.


However, when I was at Fort Hood, I had the chance to meet with a fellow blogger that I adore, this blogger also happens to be a pretty recent military widow. She and another friend invited me to dinner, and I declined. I declined, because I really did not know what to say. Part of me wanted to apologize for being lucky enough to have had a husband that survived, part of me wanted to apologize for my guilt for that, there was a part of me that was genuinely interested in her experience as a widow, and I wanted to know how she felt being alone at her very young age. The other part of me, tried to think of how I could avoid the topic, by ordering a lot of food, and just chewing. Instead I declined a lovely dinner with two lovely ladies, which one of these days I will correct. I regret this decision now.

I honestly, was shocked at my own visceral reaction, I thought I was good at death. But being a military widow is a unique experience. Since there have been wars, there have been war widows, but still until the release of this book in June 2006, there was no definitive book on the topic. That in itself is amazing. I can go to Barnes and Noble right now and probably find a million books on how to grieve my cat, but only one on being a military widow.

The Authors of this book, also do not simply focus on combat related deaths either. They talk about accidental deaths, suicides, friendly fire, illness after a long illness, and even sudden death. There are after all many kinds of military deaths. And each of these women and men left behind have a unique experience. This is different though. A military widow, is usually married to a healthy, and very able bodied youthful person, so a sudden death goes against our very core belief about health and mortality of young and healthy people.

Realizing once again I am blessed. But there is so much to learn, and I am surprised at my attitude that is normally so eager to learn about bereavement and grief, is not so eager. And I know why, this is very personal.
Posted by Rachelle Jones at 12:31 AM

If you really want an awesome book to read, check out Karen Zaccharia-Spears, 'After the Flag has Been Folded'. It's about her experiences , as a child, watching her mother greive the loss of her father in Viet Nam. I had bought it, and read it,because it sounded interesting, a week before my Husband was killed in Iraq.