Red Letter Days, Or why I think the Chancellor of UNL, ought to seek another place of employment re: the bill ayers debacle 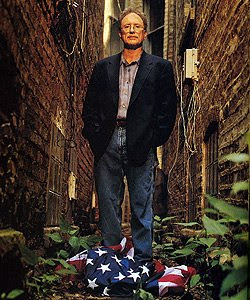 Here is a copy of the letter received by the faculty, and students at the University of Nebraska from Harvey Perlman Chancellor today.

EMPHASIS MINE, not his, frankly the entire thing should be in BOLD letters. I simply cannot believe the audacity of this letter.

A place to send our young minds to succeed is a cesspool.

But before, you read Chancellor Perlman's letter, I have this.

Chicago Tribune (via Knight-Ridder/Tribune News Service), (Dec 2001)
..."The Weatherman was linked to about a dozen bombings between 1970 and 1974 _ a bathroom in the Pentagon, a statue of a policeman in Chicago. Evidently in the process of assembling a bomb, three Weathermen were killed in an explosion in a Greenwich Village townhouse. New Yorker writer Elizabeth Kolbert noted that "It was sex and violence and, more specifically, the sexiness of violence that the group contributed to the revolutionary cause." She said that the Manson murders were treated by the Weathermen as an inspired political act, and she repeated a 1969 quote from Bernardine Dohrn, a leader of the group: " `Dig it,' Dohrn declared. `First they killed those pigs, then they ate dinner in the same room with them. Then they even shoved a fork into a victim's stomach. Wild.' " Seven paragraphs further down in the story, O'Shea came upon the part he could scarcely believe: "Dohrn teaches law at Northwestern University ..." Could it be that his alma mater (he graduated from NU Law in 1981) had put someone he now calls "an avowed terrorist" on its faculty? Reading further, he found that Dohrn's husband, William Ayers, also a Weatherman leader, is now teaching education at the University of Illinois-Chicago and had written a memoir, "Fugitive Days." In the book Ayers, 56, admits to, among other illegal acts, planning to bomb the Pentagon. He also appears unrepentant. "Guilty as hell, free as a bird _ it's a great country," he writes, noting that the real terrorists weren't him..."...

Here is the insulting letter that went out to faculty and staff...


I regret that during the controversy regarding William Ayers' visit to campus, I was in China and thus largely absent from the discussion. I am this morning meeting with the media.

I believe the controversy about Bill Ayers visiting this campus was heightened by a confluence of events which no one really could influence or predict. In February of this year, the College of Education and Human Sciences selected a speaker for its annual student research conference.

The topic was "qualitative methodology" and the committee eventually decided to invite William Ayers, a nationally recognized scholar in the field. In the 1960s Ayers engaged in violent acts in protest of the Vietnam War, for a while was a fugitive from justice, and eventually turned himself in. Prosecution of Ayers for these crimes was unsuccessful.

This year the research conference featuring Ayers coincided with a weekend in which the college also scheduled some significant events in its celebration of its centennial. Since the college expected alumni to be visiting the college, they were also invited to the conference, although the signature event for the centennial celebration was a dinner at which Ayers was to play no role.

Although Ayers' selection was widely known in the college for some time, it came to the public's attention only a few days ago in the midst of him having become a central figure in a bitterly contested presidential election. Given the national focus on his past and the appearance that his visit to Lincoln was related to the election, many people in Nebraska were furious.

Although I do not agree with this reaction, I can understand it and the concerns expressed. Given Ayers' background, reasonable people could regard him with disgust, yet our traditions permit individuals to speak, even if their backgrounds or ideas are objectionable. Nebraskans care deeply about their university. We cannot have a great university if the selection of speakers, faculty, curriculum, or activities is governed by the passions of the moment or even the views of the majority.

I want to emphasize one point as strongly as I can. I do not think the selection of Ayers to come to Lincoln to address a student research conference on research methodology was in any way inappropriate. He is an acknowledged scholar, a tenured faculty member at the University of Illinois Chicago, and a high ranking officer in the association dealing with this type of research. He was named "Chicago Citizen of the Year" in 1996 and has worked tirelessly to improve the Chicago public schools. Ayers has spoken at more than 70 universities, including Iowa State, North Dakota State, Indiana, Purdue, the University of Missouri, and Michigan State. In the final accounting of his life, there will be very negative entries for his conduct 40 years ago and there will be more current positive entries as well.

Much is made of the "fact" that he has not repented for his acts of violence. The evidence of whether he has expressly done so is uncertain, which could lead reasonable people to think he had not. It is clear that he currently leads a responsible life, one apparently devoted to improving the lives of school children in Illinois and in the nation. Repentance can come by deeds as well as by words.

The outrage by many Nebraskans was understandable but I think unfortunate to the extent it led them to seek to prevent him from coming. Most alarming, however, were some responses that were threatening to the security of the campus. As many of you know, we have faculty on this campus who specialize in assessing the level of threat in any situation and they informed me by e-mail in China that the tone and tenor of the e-mails, the phone calls, and the blogs, suggested that the reaction to any Ayers' visit would represent a significant threat to the safety of the campus. Moreover, it could create an environment that would prohibit the University from taking advantage of his expertise. The student research conference would turn into a three-ring circus.

After consultation between Barbara Couture, myself and Dean Kostelnik, it was decided to cancel his visit. There are some who are skeptical of this explanation for the cancellation and believe we were ordered by the Board of Regents or President Milliken to cancel the visit. I can assure you that we were not ordered to cancel the event and that I would resign before following such an order.

I find it difficult to accept that the actions of a few individuals can deprive this university of its right to select speakers who can contribute to the education of our students. Nonetheless I take seriously the responsibility I have for the safety of members of this community, particularly the students. It seemed cancellation was the most responsible action.

This university has always been able to invite and to host controversial speakers from all walks of life and all matters of persuasion. It is unnerving that the apparent escalating passion and violence of recent years makes the exercise of our traditional values more difficult. Once these events came together, there appeared to be no good alternative available.

I hope you will understand. I am convinced this was an unusual circumstance, one unlikely to repeat itself. I am a strong believer in our students' and faculty's right to determine for themselves who should be invited to campus to speak. But I also have a responsibility for the safety of this campus. Once these events came together, there appeared to be no good alternative available. I hope you will understand.

reasonable people could regard him with disgust

We cannot have a great university if the selection of speakers, faculty, curriculum, or activities is governed by the passions of the moment or even the views of the majority.

you're kidding me, right? this is the "let's cater to the minority view and be real PC about this..." mentality that has reduced great universities to bastions of mediocrity and cesspools of intimidation of the majority -- all in the name of "furthering" higher education. and it does nothing of the sort.

I know Harvey. He is an elitist snob who believes his academic credentials make him better than ordinary folks. His condescending letter that you reprint does nothing to dispel that opinion.

Contact all of the Chancellors. Harvey isn't the only one. Contact the University of Nebraska Foundation and the Alumni Associateion. Contact your Unicameral Senator AND all the rest of the state Senators. Contact Governor Heineman. Tell them all that Harvey has to go or no further financial support for UNL will be forthcoming.

If we can send UNL athletic directors packing, we darn well ought to be able to get rid of Perlman. He certainly is leading us through a losing season.

I have been on the phone for hours over the last week.

As has EVERY SINGLE alumni I know.

Phone calls were made to with hold all future monies from the University.

This seemed to work well enough to get the invite pulled, but this letter is one of the most insulting things I have read.

pardon my french but this guy is a douche bag.

I only wish that we had a real set of reporters. Ayers and Uh-uhbama spent over a hundred and fifty million dollars on the "education" of the children of Chicago. Wouldn't be nice if someone were to ask those two just how any children were helped.