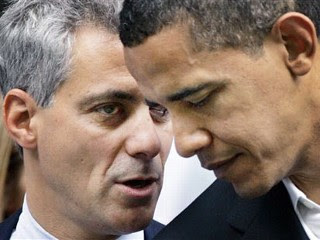 I was reading this article on Rahm Emanuel ( PLEASE go read it), which I found over at Trying to Groks tonight. A story in The Telegraph, about President elect Obamas choice for Chief of Staff. (Who I might mention is handsome, but it seems rather short, and a douche)

Anywho, I am reading it, and I come across this...

One story, more than any other, sums up the intensity, loyalty and, at times, downright nastiness upon which Mr Emanuel's reputation is built.

At a dinner to celebrate President Clinton's first election victory, Mr Emanuel began to name those who he believed had earned his enmity. As he listed the names of those he saw as traitors, he grabbed a steak knife, stood up and began plunging the knife into the table and shouting "Dead! Dead! Dead!" after each name.

"When he was done, the table looked like a lunar landscape," one witness recalled. "It was like something out of The Godfather. But that's Rahm for you."

After reading that, , I could only think about this particular scene from Pulp Fiction....

But the story does not end there...

It seems as though this behavior is almost excusable, to those around Rahm.

Why you ask? Why would this sort of thuggery be acceptable?

Well according to Rahm's very own Mother...

Mr Emanuel's mother, Marsha, a retired hospital technician, believes his extraordinary drive and determination to succeed is the result of a childhood accident in which he almost lost his life.

Whilst working part-time in a fast-food restaurant, Mr Emanuel badly cut the middle finger of his right hand in a meat-slicing machine. The wound became badly infected and as he lay in hospital with a dangerously high temperature his parents were warned that antibiotics might not be enough to save him from blood poisoning. He survived after the top half of his finger was amputated.

"That was a big turning point in Rahm's life," said his mother. "It was touch-and-go, and finally when he came out of it he was more serious. I honestly think that was his existential moment of near-death and realising that you have to do something with life."

"It's just like if you know anybody who's ever been a POW for any length of time, you will see you go along for months or maybe even years, and then something will happen and it will trigger all those bad dreams and they will come back, and it may not last 30 seconds," he said.

So, although McCain, has never taken out a knife at a formal dining event, and stabbed it repeatedly into a paper, or mailed a dead fish to a pollster...

but Rahm has, it is excusable, because he worked at Arby's?

Yeah, this bothered me, too. I was especially struck by the overal positive tone of the article while it was describing such extreme behavior.

Yeah sis, I was torn on posting it...because sure as anything, I will probably slice my finger off this week while cutting ham or something...

I wonder which finger it was? His behavior is nothing more or less than psychotic exhibitionism.

Good Choice Obama! So much for reaching across the aisle. Many of us are keeping tabs on the difference between what is promised and what is actually done.

Handsome, short and a douche. Heh.

Chop off your own finger at work, six years in a tiger cage...same difference, right?

But McCain is unhinged and dangerous.

Now that it's all said and done, I *wish* he'd done the Double Maverick. "That's where I go totally berskerer and freak everybody out."

I keep thinking about that Varifrank post before the first debate:

"I dont care if McCain walks out begins to channel the ghost of Jim Morrison, drops his pants and takes a big whizz on stage shouts "I AM THE LIZARD KING!!!,because even if he did do that, I'm still voting for him. Quite frankly, if he does do that, I will probably send his campaign money. If he also turns around smacks Jim Lerher to the ground and calls him "a commie punk", I'll fly to Manahttan and wear a "MCCAIN FOR PRESIDENT" sandwich board in Times Square and ring a bell and hand out campaign literature to the New Yorkers like those "end is nigh" folks."

I feel the need for full disclosure here. After reading a George article about "Rahmbo" (which had a rather titillating photo attached), I had a huge crush on him.

My excuse is that I was about 22 years old and he was hot. And short. And at 22 you don't notice the douchebaggery as much.

Also, I've never personally mailed a dead fish to anyone, but my MIL did mail one to me once.

So, Biden is the drunk uncle walking around slurring his words and trying to remember to pull up his pants when he leaves the latrine. And, now, we have a crazy, on-again-off-again boyfriend of your beloved cousin who no one wants at a party, but appreciates at a bar fight. He's the guy you dread showing up and are thankful when he leaves and no ambulance has had to be called. I don't get the 'cute' at all, but the douchebag part rang true.

My MIL mailed me a dead bird. That's probably about the same thing.

I read that article too, it struck me as so bizarre that an infected finger would be used to justify his actions? Give me a break. He sounds borderline psychotic. Just the man I would like to see having influence in the white house.