Where did the week go?

Oh I know, I spent over half of it, not functioning...grrrr...stupid tent.

Trying to catch up today by doing laundry. I keep wondering where ALL of the hangers I bought went. Seriously. I guess I put that on the list for the next trip to the store...AGAIN.

I managed to take the Collective to the pool yesterday, the water was cold because of rain in the morning, so they did not swim as much as I would have liked. I tried to read, and think they should make books waterproof.

I harvested 6 cucumbers, a couple of jalapenos, and a couple of Serrano's. I also noted I might have accidentally planted 2 acorn squash instead of one zucchini, one acorn...darn it. The tomatoes are teeny, and I am guessing they will all come in at one time. It figures. My Father informed me, he has a ton of nice jars! Hooray, I was loathing the idea of spending money on any. So now I must brush up on my canning skills. The farmers are out with their corn, and I only planted enough to eat, so I am thinking about going to get a bunch to freeze. There is nothing better than real corn in the dead of winter...

I am having company Saturday, and am thrilled DH's cousin is coming over for dinner! funtastic.

I had company on the third, and was embarrassed that I had burnt dinner...burning lasagna for your Italian guest...ughhh. But it did not end there, my bread was served flaming (thank God I had another loaf), and my chocolate cream pie was soupy....ughhh. The company was nice though, and Household 6 is a busy, busy woman. And teeny, I wanted to carry her around in my purse. She is headed to Las Vegas soon, to speak on behalf of military wives. It is nice having people stop through! 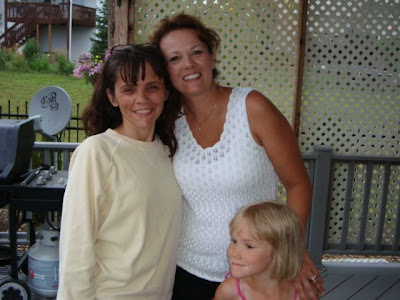 *why my dish, and grill are background I have no idea...
Posted by Rachelle Jones at 12:01 PM