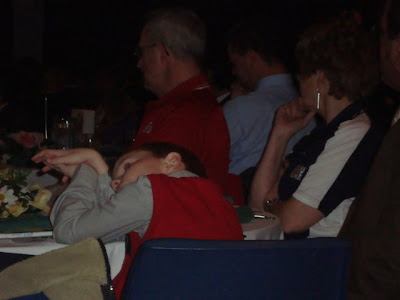 SR, starved and bored out of his wits.


While at the Saudi student dinner the other night, The Collective were quite good. They were really good considering they had to wait a while for dinner, and listen to several speeches.

After dinner, I thought I might take The Collective to the Art Gallery, as they were having a walk thru, with fruit and chocolate. However, PN was waering her Easter shoes from last year, and learned her first lesson in "do not wear those, your feet will hurt by the end of the night."

So after dinner, we walked through the student union, for a short tour. SR loved it. And then we went outside, so they could run. In front of the student union, there is a fountain that is empty right now. It has large stone boulders in it, so The Collective were climbing. It seemed harmless, until about 30 minutes into it, when SR tells me there is a sign that says, "no climbing or wading". I could not read the sign from where I was sitting.

About that time, we heard police sirens going off somewhere downtown. I swear I have never seen my children move so quick in their lives. They seriously thought the police were coming to arrest them.
Posted by Rachelle Jones at 7:05 AM

I feel for your kids while they waited for dinner and sat through speeches of no interest to them. I don't know if I could have behaved as well, and I'm an adult ... I think. I would have wanted to go outside so badly. I don't blame them for running.

I wouldn't have climbed on the fountain. I'd automatically assume it was off-limits. If I had heard the sirens, I'd freak out too. Did you laugh?

The word for verification is "culeess" - looks like clueless!

I have personally felt like SR at some boring presentation that ranks right above the rubber chicken.

Good kids. If the fountain was drained I wouldn't worry about it. The sirens and the reaction of the children was priceless.