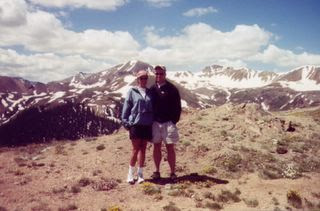 I have posted this photo before, and i think this is the last cross country hike thing we did. We hiked through Colorado, and Utah. We had a wonderful time.


We are getting ready to take The collective hiking, and on our first over nighter in a tent...DH and I used to love to go hiking....and we have not gone since the collective were born. Oh sure I have taken them on short nature hikes, but it is not the same. Our old wonderful tent...I guess the poles, went bad. Who knew they could do such a thing? We did replacement poles for it. I suppose it goes to show you, if you don't use it, you will lose it.

I am looking forward to it, as I do none of the cooking while camping, and my only rule is, I get a shower EVERY night. Hiking is nasty, and sweaty. It should be fun. I think The kids might complain on the long hikes, but hell Nebraska is pretty flat.

The Collective have taken to picking dandelions for me as of late, and they get SOOOO excited seeing them. They think they are bright and beautiful. I tried to explain to them that no one wants them in their lawn, but they are indeed useful.

I have since attempted to give the collective a tutorial in all things one can do with dandelions.

They are edible, and supposedly are quite good cooked as greens (I have not done this).

They are also delish served fresh in salads, I had this at my Grandparents one time, Grnadma made hot bacon dressing. They were good.

Here is an entire page of recipes here

My Mother's parents made dandelion wine out of dandelions...

Here are some medicinal uses for dandelions, found HERE

---Medicinal Action and Uses---Diuretic, tonic and slightly aperient. It is a general stimulant to the system, but especially to the urinary organs, and is chiefly used in kidney and liver disorders.

Dandelion is not only official but is used in many patent medicines. Not being poisonous, quite big doses of its preparations may be taken. Its beneficial action is best obtained when combined with other agents.

The tincture made from the tops may be taken in doses of 10 to 15 drops in a spoonful of water, three times daily.

It is said that its use for liver complaints was assigned to the plant largely on the doctrine of signatures, because of its bright yellow flowers of a bilious hue.

In the hepatic complaints of persons long resident in warm climates, Dandelion is said to afford very marked relief. A broth of Dandelion roots, sliced and stewed in boiling water with some leaves of Sorrel and the yolk of an egg, taken daily for some months, has been known to cure seemingly intractable cases of chronic liver congestion.

A strong decoction is found serviceable in stone and gravel: the decoction may be made by boiling 1 pint of the sliced root in 20 parts of water for 15 minutes, straining this when cold and sweetening with brown sugar or honey. A small teacupful may be taken once or twice a day.

Dandelion is used as a bitter tonic in atonic dyspepsia, and as a mild laxative in habitual constipation. When the stomach is irritated and where active treatment would be injurious, the decoction or extract of Dandelion administered three or four times a day, will often prove a valuable remedy. It has a good effect in increasing the appetite and promoting digestion.

Dandelion combined with other active remedies has been used in cases of dropsy and for induration of the liver, and also on the Continent for phthisis and some cutaneous diseases. A decoction of 2 OZ. of the herb or root in 1 quart of water, boiled down to a pint, is taken in doses of one wineglassful every three hours for scurvy, scrofula, eczema and all eruptions on the surface of the body.

Thank goodness you posted! I miss reading about you when you don't.

The camping/hiking combo sounds fun. I am not much of a hiker or a camper so my kids are out of luck until Dad comes back. :)

I remember picking a beautiful bouquet of dandelions for my children's church choir director one day before practice. The older kids laughed (I had no idea why) but she very carefully got them some water & was very kind about it all. :)

omg! I had no idea you could do so much with dandelions! i'll have to try a recipe! We get a TON of dandelions in Alaska. HUGE dandelions! (I think its because of all the daylight)

I'm going to have to show the oldest daughter your post. She thinks that dandelions are going to solve the world's problems and is working on a way to make clothing out of some part of the plant. (It is really soft.)

Do you ever stop working, woman?