Your name will be bleach

This evening my Father and his fiancee were here, after attending a terrible Nebraska Husker game.

We had eaten, and DH volunteered to run some errands.

I said, DH I need bleach.

When DH left, I sat in the recliner speaking to my Father and his fiancee about the dog conversation that occurred just the other night. Yeah there was a long and healthy debate over dogs. One in which SR and I did understand why PN and DH felt a dog was soooo Necessary. No overlap. A Venn Diagram with NO overlap. As I am trying to explain this to my Father... 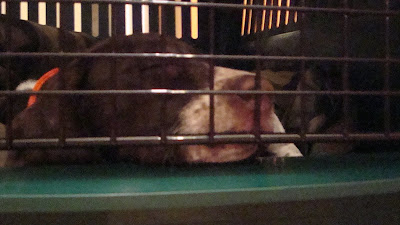 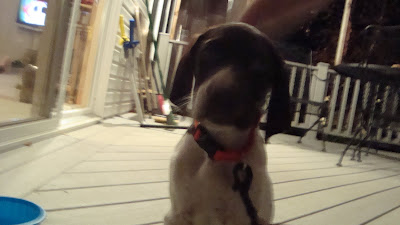 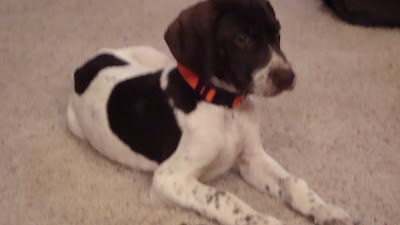 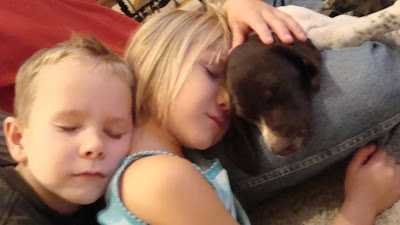 This is 8 week old Poncho, the newest member of Casa De Dust.

It is a living and breathing puppy, who misses his siblings, and Mother tonight.

So far it seems as if he understand the word no, and has a healthy howl, and bark.

Not my job...I nursed humans for 15 months and survived 3 plus years sleep deprived.
Posted by Rachelle Jones at 12:20 AM

oh my.....great picture of the kids and Poncho...life will be different now!!!

I must admit I was secretly rooting for DH... Good job, DH!!!

Yes, dogs can be a lot of work, but they are a blessing, and your kids will not only enjoy Poncho, but he will be the confidant that they can share everything with, and have a supportive buddy who just gives a lick...

That is funny!! And awesome. And I noticed the time stamp on this and your tweet. WHY were you up that late? Taking Poncho out to tinkle? hahaha

OH my goodness, he is adorable. And the pic of your little ones with him...!

I don't know how many pups you've had from the wee age of 8 weeks, but if you need any tips, I'm a volunteer puppy raiser for a guide dog school. I'd be happy to tell you what's worked for me. :) I'm "LabradorRodeo" on Twitter...I just started following you.

Good luck! It's a pain in the butt at first, but having a well-trained and well-behaved dog is a great joy.

Aw, congrats! My pup is part german shorthaired pointer, and she is a smart lady. Once he gets out of true "puppyhood", he will smart and take to training quickly.

That said, I'm with you -- I will never be the one getting up in the middle of the night with a puppy!

next, I tell people all the time: he was a dog when ya got him & he's still a dog. so it is the PEOPLE responsibility to control his environment -- where he spends his days, his nights, where he eats, chews and pees & poops.

puppies teeth/chew so get him HARD dog toys -- ones that you can put peanut butter or puppy biscuits inside. It will keep him content for HOURS. when you catch him chewing something other than his toys, take the forbidden object and replace it with his chew toy. He'll get the message.

He needs to pee/poop so give him an area that is easily cleaned (with bleach) when he does have an accident. but MOST IMPORTANTLY he needs to be on a schedule of going outdoors... and if you don't want to walk him, get him a little fenced/penned area and put him in there. If you use puppy training pads, put a soiled one (or some of the newspaper you have used) inside the pen OR take it with you when he is walked so he knows what you want him to do.

lastly, be sure to enroll in a "people training for dogs" class... usually 3-5 months of age. it will be GREAT for all of you and will be immeasurable contribution to a long and happy life with the most wonderful of God's creatures (oh, and the dog, too!)

lol, he should totally be called bleach.

A cutie for sure!

Try puppy pads so "Ponch" can learn to go inside. Cute dog. Lulu sends a big wet kiss to Ponch! Welcome to the party.